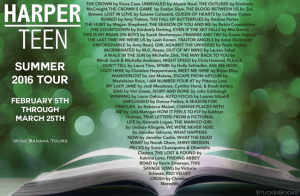 Okay, first, you probably want to know my key word, right? Because you’ll need that for one of the prizes.  It’s will.

There are two contests you can enter.  The first is a prize pack of 45 books (not including The Crown by Kiera Cass, Escape from Asylum by Madeline Roux, Sing by Vivi Greene, The Countdown by Kimberly Derting or United as One by Pittacus Lore).  One person will win the entire summer catalog (except for those five) and four other people will be able to pick three books they want from the catalog.  To enter that contest, click here.

The second contest is for five finished copies from the winter catalog (Front Lines by Michael Grant, Revenge and the Wild by Michelle Modesto, The Lifeboat Clique by Kathy Parks, Symptoms of Being Human by Jeff Garvin and The Girl from Everywhere by Heidi Heilig).  To enter this, you need to collect all the daily words from each stop (a total of 50) and then email them to HarperTeenTour@gmail.com.  Again, my word is “will.”  For a link to all participants, skip to the end of this post. 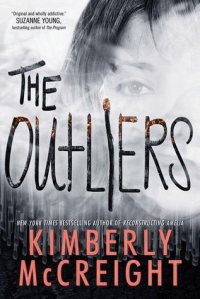 The Outliers is by Kimberly McCreight.  Click here to add it to your Goodreads.

“From the New York Times bestselling author of Reconstructing Amelia comes a fast-paced teen series where one girl learns that in a world of intrigue, betrayal, and deeply buried secrets, it is vital to trust your instincts.

It all starts with a text: Please, Wylie, I need your help. Wylie hasn’t heard from Cassie in over a week, not since their last fight. But that doesn’t matter. Cassie’s in trouble, so Wylie decides to do what she has done so many times before: save her best friend from herself.

This time it’s different, though. Instead of telling Wylie where she is, Cassie sends cryptic clues. And instead of having Wylie come by herself, Jasper shows up saying Cassie sent him to help. Trusting the guy who sent Cassie off the rails doesn’t feel right, but Wylie has no choice but to ignore her gut instinct and go with him.

But figuring out where Cassie is goes from difficult to dangerous, fast. As Wylie and Jasper head farther and farther north into the dense woods of Maine, Wylie struggles to control her growing sense that something is really wrong. What isn’t Cassie telling them? And could finding her be only the beginning?

In this breakneck tale, New York Times bestselling author Kimberly McCreight brilliantly chronicles a fateful journey that begins with a single decision—and ends up changing everything.”

Or just buy it:

I was also lucky enough to get to interview Kimberly McCreight.

What was the inspiration for The Outliers?

My daughter has always been uncannily empathetic. For the most part, this is something that has served her well. It has helped her in social situations and has strengthened friendships. It has certainly made her easier to parent. But being so in touch with other people’s feelings can be a burden, too. When you are so focused on other people’s feelings, you can lose sight of your own.

And I can relate to all of that because I tend toward the highly-sensitive myself. And as I thought about it over the years, I realized that is true for most of my closest female friends.

This led me to consider a possible connection between heightened emotionality and intuition, and to ponder the potential implications. To wonder what it would mean—for all of us—if we were to discover that women’s intuition were real.

At its heart, The Outliers is a mystery about one troubled teenaged girl overcoming her fears and trying to help find her best friend, but it’s also about what might happen—for all of us—if we redefined what it means to be strong.

Would you want to be an Outlier?

Definitely! Being an Outlier might be a burden in some respects, but I would definitely trade the hardships for that incredible potential. (Also, there is a slight possibility that I already think I am an Outlier. According to my husband, it is mostly downside, at least for him.).

This is both your first YA and your first series.  Which of those is a harder transition?

First off, I think writing is mostly a challenge, just in general. For me, getting from my very messy (hide under your covers) first draft to a working, readable-by-others version is one of the trickiest stages, while the very early days fresh off the blank page are easier for me. This may be because I never go back and read what I’ve just written and thus am able to lull myself into a false sense of security.

Also, I think what is easiest as a writer is whatever you are used to. Because I have has a teenage POV character in each of my adult books, I did not find the transition to a YA voice to be that substantial. However, this was the first time I did not switch POV’s. Learning to get in the necessary information for the mystery in one POV was a new challenge, but in the end it was really rewarding.

As for the trilogy aspect, I’ve completed my first draft of Book Two and I would say that it really does feel like an extension of Book One, and in that respect it has felt extremely natural.

Why are the bad things always so much easier to believe?  It shouldn’t be that way. But it is, every single time. You’re too sensitive and too worried, they say. You care too much about all the wrong things. One little whisper in your ear and the words tumble through your head like you’re the one who thought them first. Hear them enough and pretty soon they’re etched on the surface of your heart. But right now, I’ve got to forget all the ways I’ve come to accept that I am broken. As I sit here in this cold, dark room, deep in the pitch-black woods, staring into this lying stranger’s eyes, I need to think the opposite about myself. I need to believe that I am a person I have never known myself to be. That in my deepest, darkest, most useless corners lies a secret. One that just might end up being the thing that saves me. That saves us. Because there is a lot that I still don’t understand about what’s going on. So much, actually. But I do know this: despite all the fear in this woman’s eyes, we need to convince her to help us. Because our lives depend on it. And on us getting out that door.

If you could make one book mandatory, what would it be and why?

The Handmaid’s Tale by Margaret Atwood. Because it says so much about what it means to be a woman and a girl. You cannot read it without being forever changed.

What are your five favorite books?

Below are five of my favorite books. But I have a huge group of favorites—both books and authors—so this a small sampling, listed in no particular order:

To The Lighthouse, Virginia Woolf

What are you reading now?

The fantastic Don’t You Cry, forthcoming by Mary Kubica. The riveting Vanishing Girls by Lauren Oliver and I’m listening to When Breath Becomes Air by Paul Kalanithi.