Finished Survival Colony 9 by Joshua David Bellin.  I received a copy for review. 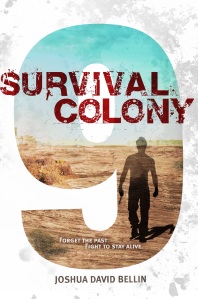 “In a futuristic landscape ravaged by war, a colony’s hopes for survival hinge on one teenage boy in this fast-paced, action-packed story.

Querry Genn is in trouble. He can’t remember anything before the last six months. And Querry needs to remember. Otherwise he is dead weight to the other members of Survival Colony 9, one of the groups formed after a brutal war ravaged the earth. And now the Skaldi have come to scavenge what is left of humanity. No one knows what the Skaldi are, or why they are here, just that they impersonate humans, taking their form before shedding the corpse like a skin.

Desperate to prove himself after the accident that stole his memory, Querry is both protected and tormented by the colony’s authoritarian commander, his father. The only person he can talk to is the beautiful Korah, but even with her, he can’t shake the feeling that something is desperately wrong. Whatever is going on, Querry is at the center of it, for a secret in his past not only makes him a target of the Skald’s wrath, but the key to the colony’s future.”

This book was ridiculously fun to read.  I’m not sure what that says about me, because it’s actually both bleak (dystopian is an understatement) and scary (the Skaldi are terrifying), but I had the best time with this book.

Because Querry has memory issues, we are able to learn about this world a little at a time in a way that feels organic and not annoying (no huge information dumps here).  Even with his problems—and the scorn of not a few of his fellow colony members—he’s a hero we can root for.  Even so, he’s not perfect.  He’s pretty easily fooled (being a near-lifelong horror movie fan, I think I’d deal with the Skaldi pretty well), which could be a major problem later on.

Apparently there will be a sequel, which is excellent news.  Highly recommended.