Finished The Mockingbirds by Daisy Whitney.  I received this from the publisher at BEA.  This will be released on November 2.  Sometime soon, I’ll be doing another review with Michelle.

Alex is a talented musician and student at an exclusive boarding school.  When she’s date raped one night, she doesn’t want to go to the police and she knows the school administrators will be worse than useless.  Fortunately, the school has a semi-secret group called the Mockingbirds, a small group of students who avenge wrongs.

While the book sounds kind of depressing, it really isn’t.  Yes, Alex gets raped, but instead of it being a meditation on victimhood, it’s more of a story of bravery and overcoming fear and standing up for yourself.  It’s a story about friendship and doing the right thing.

This book is completely amazing.  I was pretty sure I’d like it when I read that the student group took its name from To Kill a Mockingbird, but I was hooked from pretty much the first sentence.

I love Alex and her friends, who all stood by her without a second thought or any sort of judgment.  In our society, it seems like there’s always some sort of second guessing when it comes to rape, but none of her friends asked what she was wearing or how much she’d been drinking or why she was even talking to that guy anyway.

Which brings me to my last point.  Alex is date raped, which is (obviously) different from stranger rape.  The idea behind this particular case is whether or not she said yes, not if she said no.  She was at a party and drinking, so was she able to give consent?

In a lot of ways, that made the story even more poignant, because Alex first had to come to terms with exactly what happened herself.

I cannot possibly recommend this book more forcefully.  I want everyone I have ever met to read it and actually want to demand that strangers on the street do, too.   This is a wonderful, amazing, thought-provoking book.  Please read it and then please let me know what you think. 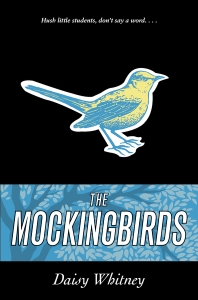